Top Posts
Top 5 cryptocurrencies to watch this week: BTC,...
Play-to-earn games are ushering in the next generation...
6 Questions for Jennifer Wines of Fidelity Private...
Crypto as a ‘public good’ in the 22nd...
Polygon pays $2M bounty on bug which could...
cryptocurrency mining low budget ,ethereum, zcash mining for...
Worldcoin, Now Valued at $1B, Has Grand Plans...
Real Estate Platform to Embrace Bitcoin & Ethereum
Bitcoin Corrects after Hitting ATH at the $66,900...
Square Considering to Build Bitcoin Mining System: Jack...
Home Bitcoin News Here’s why Bitcoin mining stocks have been outperforming BTC price in 2021

One of the crypto mining stocks delivered more than 1,600% returns year-over-year (YoY) while Bitcoin’s gains in the same period came out to be around 290%.

Bitcoin (BTC) might have outperformed traditional financial markets regarding investment returns, but the cryptocurrency still fell behind Bitcoin-related companies.

The price of BTC climbed by about 290% year-over-year in which it surged from $10,695 to a little over $42,000. In comparison, shares of Marathon Digital Holdings (MARA), one of the largest North American crypto mining companies, rose by 1,641% in the same period. 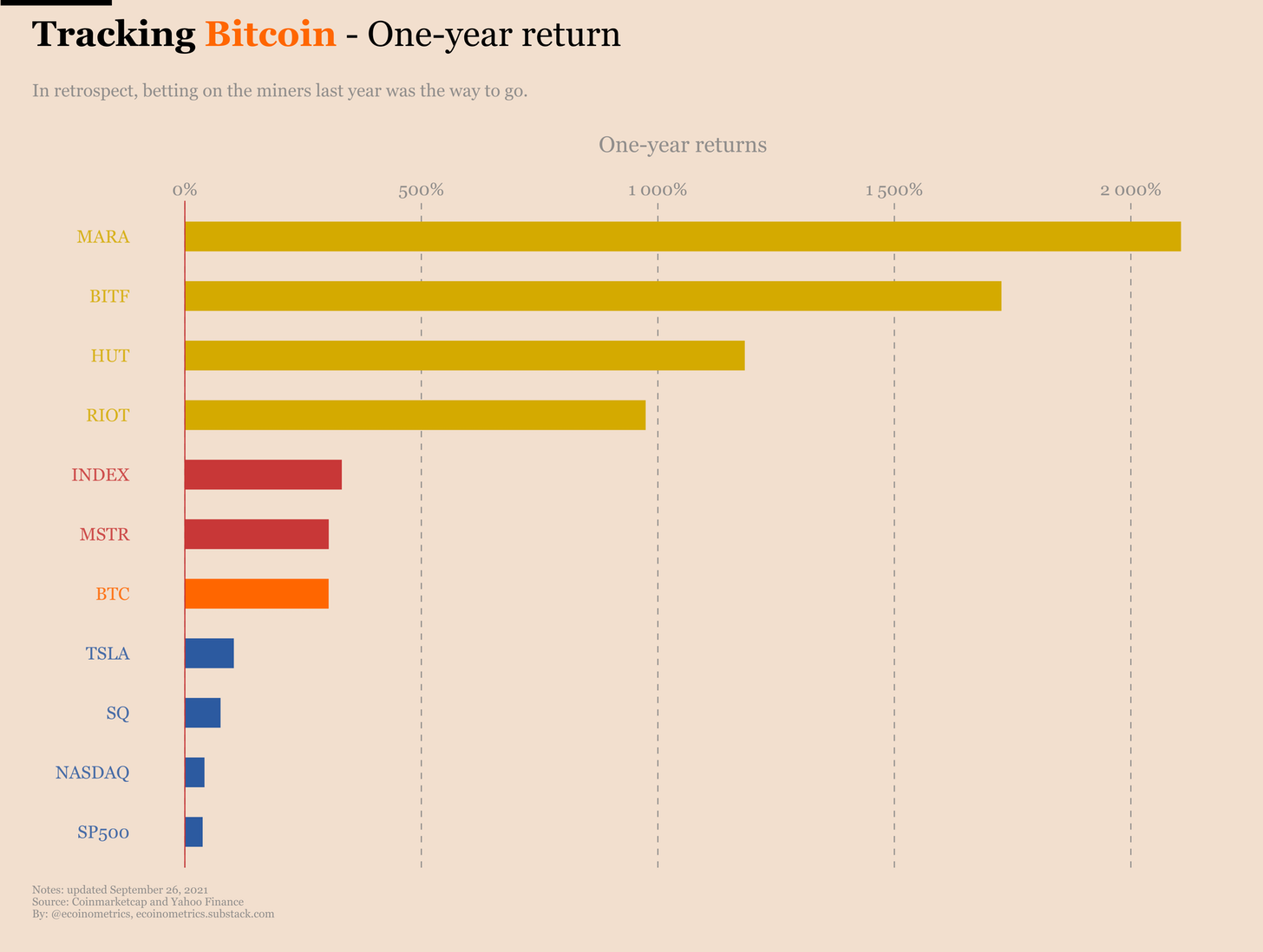 The performance of spot Bitcoin versus crypto-focused stocks in a year. Source: Ecoinometrics

“I bet a lot of institutional investors haven’t yet dipped their toes in trading spot BTC, mostly for compliance reasons,” the analyst explained in an article published Sept. 27, adding:
“It is a bit like the gold miners when back in the days it was complicated to get your hands on physical gold. So the play for these guys has probably been, stay away from spot but trade the stocks.”
The statements surfaced as Morgan Stanley reported in its securities filings that it had more than doubled its exposure in Grayscale Bitcoin Trust (GBTC), a traditional investment vehicle for digital asset investors.

In detail, the Morgan Stanley Europe Opportunity Fund owned 58,116 shares of the Grayscale Bitcoin Trust, or GBTC, as of July 31.

In July, Cathie Wood’s Ark Invest also purchased more than 450,000 GBTC shares worth about $1.4 million. In line with mining stock performances, these investments showed an increase in the institutional appetite for crypto-focused yet traditional investment products.

Nick added that investors would keep adding their capital into crypto mining stocks as long as they don’t see a viable alternative, such as an exchange-traded fund in the United States.

The demand for mining stocks increases as the majority of firms focuses on two important prospects: scaling and holding.

For instance, Marathon reported in its non-audited August report that it had received 21,584 top-tier Bitcoin mining ASIC machines from Bitmain in 2021, adding that it is due to get another 5,916 that are currently in transit. As a result, the company expects to run at least 133,000 Bitcoin mining machines by the middle of next year.

Meanwhile, Marathon noted that it now holds 6,695 BTC, including the 4,812.66 BTC it purchased in Jan 2021. As a result, the fair market value of Marathon’s current bitcoin holdings is now around $333.4 million, giving the firm adequate capital to scale up its productions in the future.

Similarly, Riot Blockchain’s August report showed a 451% increase in its Bitcoin mining capacity on a year-over-year basis, helped by its fleet of 22,050 miners, with a hash rate capacity of 2.2 exahash per second (EH/s). The firm mined 441 BTC in Aug 2021.

Riot noted that it plans to have 25,650 Bitmain machines in operation by early September. It is currently building a new mining facility in Texas.

The views and opinions expressed here are solely those of the author and do not necessarily reflect the views of Cointelegraph.com. Every investment and trading move involves risk, you should conduct your own research when making a decision.

Here’s why Bitcoin mining stocks have been outperforming BTC price in 2021 was last modified: Tháng Chín 29th, 2021 by Crypto Expert

How to Buy Bitcoin: Best Practices, Where to...

What is Cryptocurrency? A Comprehensive & Detailed Guide...